This morning we found out how it feels to be done with the Moisie.

Yesterday’s bonfire was still smoking when we woke up. As I was burning my second batch of scrambled muffin (the first one was spoiled by unpurified water), the kids started a brigade to take down the canoes and our stuff. The tide rose during he night, which made things a little more complicated. At least now it’s going down, which should help us get to Moisie. 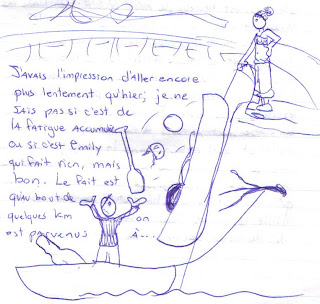 I had the feeling to move even slower than yesterday. I don’t know if it’s because of accumulated fatigue or if Emily is slacking off, but anyways. I guess we’re all tired. After a few interminable kilometres, we finally made it to…

The Moisie ends here, in the Gulf of the St-Lawrence. All of a sudden, without any foreword or warning, the majestic cliffs flattened out and left room to an infinite stretch of saltwater. 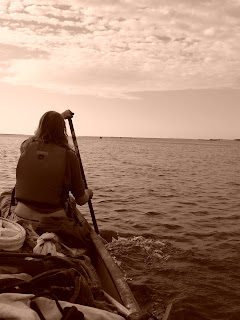 So this is it.

A few hundred metres from the shore of Moisie, we recognized the silhouette of our beloved bus driver, Stan the man. He must have missed us, somehow. As he awkwardly dealt with the kids’ demonstrations of affection towards him, we loaded the bus in a hurry and made fun of the absurd quantity of Québec flags floating in the wind at each little house in “Moisie Beach”. We also made fun of the biker-looking guy standing proudly next to a native pride flag and a confederate flag. When everything was loaded, we lingered by the “danger dangerous wharf” sign and then strolled slowly towards the beach to dip our toes in the ocean. 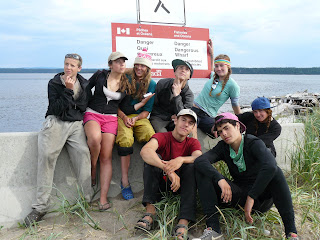 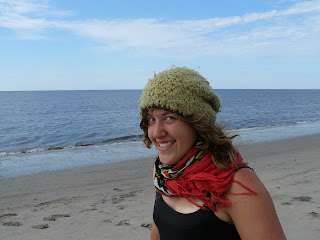 As Marcus found a crab in his unsuccessful quest for a sand dollar, I strolled on the beach and tried to define the weird mixture of feelings I’m experiencing. I end up telling myself that I don’t really care about defining it and I beam at the now distant Moisie hills and at the storm cell we’ll never be hit by that hovers above them. My toes in the sand, my eyes on the river, I enjoy the very last seconds of the trip. 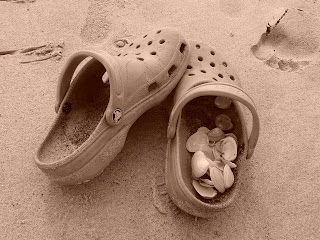 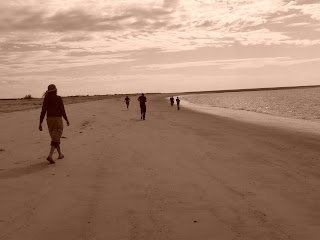 And that’s how the story ends.

Of course, the trip back to camp was filled with adventures and anecdotes of all kinds, such as:

- Luke and his high (in)tolerance to saltwater
- The food rampage in the Maxi in Baie-Comeau and the meat sweats in the bus
- The Sept-Îles Marathon that we randomly came across
- The resurrection of Marcus’ watch after 21 days of absence
- Finding out that there is a free Paul McCartney concert in Québec city at a corner store in La Malbaie
- Calling home from Baie-St-Paul as a helicopter is taking off next to our bus
- The beluga whales on the Fjord during the ferry ride
- My first flushable toilet in a month on the ferry
- The dude with the “breakfast included” t-shirt casually posing on the ferry
- The glorious drive across Basse-Ville and the excitement at the sight of known landscapes
- Watching Montmorency Falls (they're still pretty freakin' big, even after the Moisie) as I overhear Marcus’ tales of his trip to India
- Our arrival at my house and the priceless stares of my 80 year-old neighbours as we unload the bus
- The pool, the barbecue, the chocolate milk
- The lady at the grocery store disagreeing with our choice of granola cereal
- My dad’s hernia
- Finding out about Claude
- Needing a hug after finding out about Claude
- The empty, freshly painted playroom
- Nat checking out my dad’s woodwork in the kitchen
- The Chocolats Favoris, at last, after that place being so often part of our daydreams for the past month
- Listening to Paul McCartney from across the river and looking at pyrotechnic effects next to Frontenac Castle
- Buying and reading Le Soleil and even doing the crosswords. In French.
- The boys fighting for the sports section
- Nat looking like a hobo with his (beyond) filthy t-shirt and his garbage bag at the gas station
- The Motel Madrid and it’s ridiculous dinosaurs and bigfoot trucks 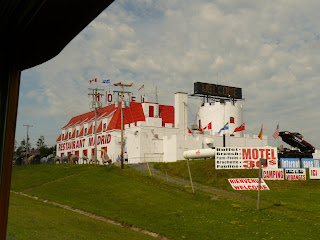 But really, it is when I turned away from the ocean and looked for the last time at he remains of the Moisie cliffs stretching across the horizon line that I knew that it was really over.

I don’t know if I’ll ever come back here some day.