Another pit day under the burning hot ☼ of the “southernmost” part of our trip. It’s funny how cardinal points can be relative sometimes.

Our lazy morning was particularly enjoyable. As trains rolled by and the sun started turning our tent into an actual outback oven, I rolled around a couple of times and enjoyed every minute of this only morning where 8h15 didn’t mean anything at all. Marcus had, as usual, deprived himself from sight and hearing for the night. For reasons I can’t really put my finger on, I always have the impression that he “turns himself off” for the night.

Around 13h00 we got the “cliff-hanger’s club” together and decided to venture on a new hiking expedition. This time, our project wasn’t quite as ambitious as the first one: we were going to hike up the hill across the stream from our campsite, hoping to get a good glance at train tracks and the surroundings. What seemed to be a pretty chilled out hike ended up being quite an expedition. From the ascent through a boreal jungle punctuated by improbable crevasses and sphagnum moss-covered boulders, we moved on to a flat-ish, rather uneven arid-looking summit infested (of course) with bugs of all kinds, from which we could admire our island and the minuscule star of human bodies sun tanning on the beach that we had left behind. Now we have a better idea of what the helicopters see when they zip by in the canyon. The descent was somewhat sketchy and perilous. I almost shat my pants when a part what I believed was ground but ended up being unsteady moss and organic matter collapsing under my feet, causing me to drop about 4 and a half feet onto a ledge. We are small, fragile beings on the back of a giant. 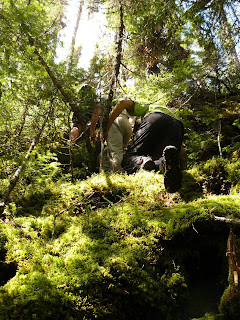 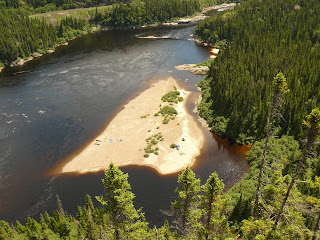 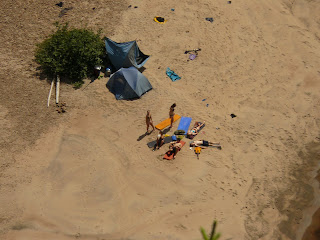 Marcus’ beard progressively caught up with his goatie. He boiled his clothes tonight in order to clean them a little. At least I’m not the only one that’s weird, I guess.

The bottom of my foot hurts like a bitch. Probably another blister.

The afternoon went by slowly as we made unreal burritos and I read a few chapters of the Éric-Emmanuel Schmitt novel I barely touched since the bus ride. I kind of wish I had a somewhat lighter book. Whatever. 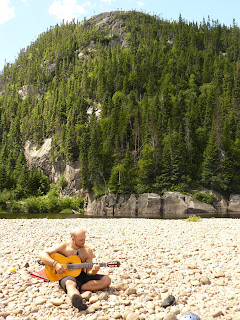 We hung out in the sun as Nat told hilarious anectodes about his father and we took turns playing the guitar. Hayley went all the way from the 60’s to nowadays with different arrangements of her clothing.

Speaking of clothing, I just found out that Jacqui brought 9 SHIRTS on this trip.

We had a late afternoon adventure as we took Sherman/Doug the inflatable shark for a swim down the C1 next to our campsite. Only Marcus, Nat and I were up for it. Upstream paddling isn’t my forte. The escapade took a premature end when the blunt end of my plastic river knife scabbard punctured the made-in-china skin of poor Sherman. I struggled to keep it at least partially inflated as I drifted towards safety and barely made it through the eddy line. Tragic end for the only pet we managed to keep until the end of this trip. 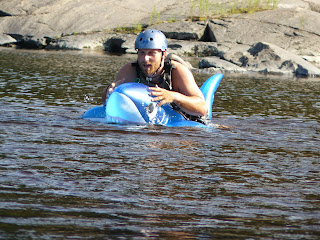 Our somewhat dry couscous dinner was highlighted by the usual boys vs. girls drama and by a driving range session of base-rock. Another random skill to develop. 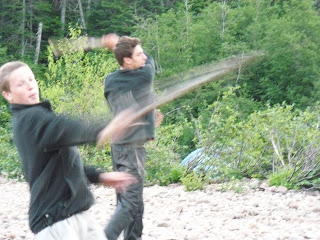 There are weird echo effects around the island. I hear children giggling in the woods. That’s pretty fucked up.

We saw people casually strolling on the train tracks. I wonder where they came from and, sobre todo, where they were going.

Tomorrow we’ll be in Moisie. 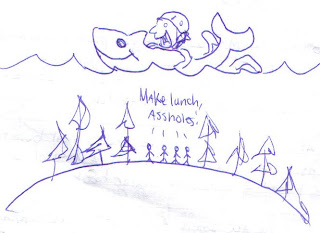