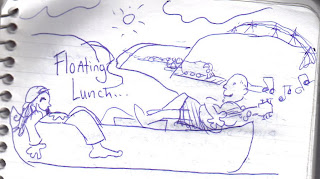 Funny day today. Haha. I just wrote “Haha” to emphasize how funny the day was. Maybe it already was clear enough and I didn’t need to explain that, or maybe it was necessary but the additional comment on my hesitation to write the first comment was too much, or… 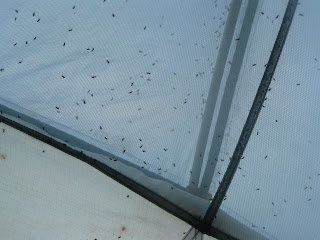 So our morning started with a conversation in the tent with Marcus about a few topics of interest until the few leftovers of a thunderstorm that occurred earlier in the morning dissipated. Our breakfast was brightened up by a debate on how we should get our revenge on the gros con that owns the pourvoirie and yelled at us yesterday. At lunchtime, Marcus will confess the evil plan he put in place in order to piss off the old fart:

My co-tripper is a criminal genius.

Other alternatives that came up during the brainstorm included:
- Writing “asshole” in giant letters on the cliff with broken parts of his lounge chairs
- Hide the chairs on rocks accessible only by canoe or motorless boats
- Actually take a dump on his chairs

After about 15 km we ended up at the gros cave’s basecamp. One of his clients said hi and asked how the thunder was the night before. As if he cared. Veux-tu ben me dire ce que ça lui câlisse? Ben oui, t’étais en dedans de ta p'tite cabane durant l’orage pis pas nous. Bravo. Tant qu’à ça, farme ta yeule, gros cave.

Our lunch today was probably a milestone of the trip : train tracks starting to run along the river, cliffs on either side, all the boats perfectly attached to each other, cynical comments and giggles about the girls’ « dirt loaf » (an attempt at making fruit and seed loaf that resulted in an unidentified material that was so dense it didn’t even float), Nick and I lazily steering us away from eddies and the odd occasional rock, the sun shining between storm cells, Marcus playing Santeria, St-Lawrence River and Cover This, everyone else chilling or napping, non-awkward silences, soy nut butter and strawberry-rhubarb jam stains all over our stuff… 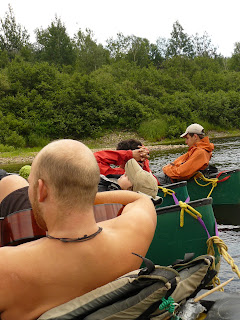 And then of course came the rain and the wind.

The rest of the afternoon, we tried to keep moving between each storm cell.

We remained entertained by a series of comical situations including:

- The collective rant about fruit cake (especially my grand-maman’s) and it’s mention later on in Passwort Deutsch I in the tent
- The first lightning drill with the rock throwing contest
- Pulling over at the last minute for a lightning drill when we noticed our hair was starting to stick out in the air by itself
- The apotheosis of the girls vs. guys during the second lightning drill 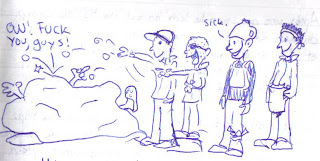 Hilarious. Too bad I don’t catch the last bit with Luke dumping water on Emily and Sarah’s heads with the bailer and them beating him up into the river on video.

Nat asked me how it was to be a tripper and if I always knew that I wanted to do that job. It reminded me of a conversation I had with Pope on the last day of my explorer… roles reversed, of course.

An aerial view of the campsite we are staying at (such as the one that can be seen from one of the millions of helicopters that fly above our heads since Salmon Ladder) would probably look more or less like that:

At least there is a beach on one side of the shingle bank so it’s not as hard on our backs as yesterday. The bank had no name so I kind of wanted to call it something clever and write it on the map, but all I could come up with was lame shit like “storm cell island” or, even worse, “trip island”. WAY too lame to stay for posterity.

I finally popped out the liquorice and jujubes out of my barrel today. Kids couldn’t contain their happiness. “I think I’m in love”, said Nat.

My ankle is still décâlisse, but at least my eye and lip are back to their normal size.

Tonight, I fall asleep with the rumbling of freight trains full of iron ore on their way to the distant north or back to Sept-Îles, the giggles of the kids around the fire, the melodies of the guitar, the first set of Train Tracks, and one of the hundreds of waterfalls we’ve come across so far.