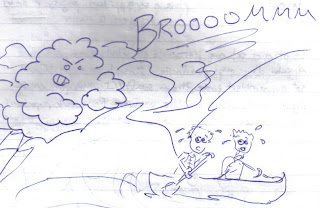 This morning, I woke up with my feet in a puddle and my back had about this shape:

For a change, we took forever to get out of the campsite. For some reason the girls were a lot more efficient this morning. The kids had decided that because of the shitty tent spots, they’d try to sleep outside last night. Unfortunately (but quite obviously), rain ruined their project and they all had to retreat hurriedly in the boys’ tent early in the morning…

The first set of the day was pretty sweet and kind of similar to the one we ran yesterday. Then we ran another set that seemed to be just a big C1 in the distance but that ended up, as we got closer, being a wave train of epic proportions. Hayley and Jacqui dumped. It was the first dump since the pinned boat.

The more time I spend on this river, the more I realise the scale of what’s around.

We are fucking ants out here.

We had a drifting lunch today, which coincided with the apex of nice weather for the day… but things got shitty pretty fast after that. After eating our 250418th snack with the intention of getting Black Betty somewhat lighter before Salmon Ladder, we started hearing thunder. We then started a time race against the approaching storm front that appeared from the mountains behind us. Quickly enough the wall of rain caught up with us. Ahead was a gigantic cloud shaped like a comic book villain about to punch us in the face…

We finally pulled over on what was supposed to be a campsite but was in fact a flat, overgrown area with some kind of a fire pit. While Marcus was working on creating crop circle-like tent spots in the barrens, I put together a pimped out fire pit back in the woods and picked wild leeks that we had with the mac and cheese.

Time had come to teach the kids how to use the outback oven and make lunch for the following day, and girls happened to be first. After a laborious effort, they ended up making an ok bannock without setting anything on fire. Good for them.

Tonight is the first night where we are going to bed before dusk. Our headlamp batteries are starting to run low. This is a little sad. 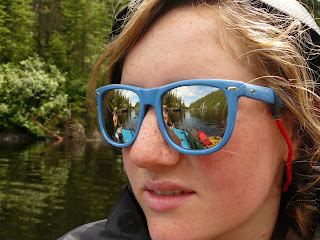 Health and physical condition update: before going to bed, I scoured the now pretty badly infected cut on my ankle with Bactine, Polysporin and whatever was left of my self-control. Hopefully it heals. Also, my hair is now long enough to braid it into one braid instead of two. Marcus’ hair isn’t, on the other hand.

We checked out what’s ahead for the next days on the maps and figured out that we aren’t that late after all. We might even be able to have pit days (at last). If only kids moved faster in the morning, that would help.

Slide show tonight. The video of Jacqui and Sarah is just absurd.