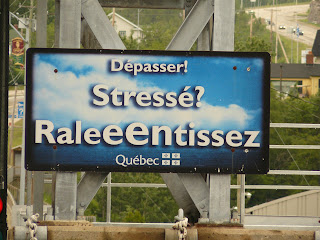 Tap tap tap. Marcus’ superhero watch was about to wake us up when my dad, my mom and Ginger "knocked" on the fly of my tent to make sure that it was normal that we were still sleeping. Parenthood. We packed up as my dad keeps Marcus and our Robot-Driver Stan busy with his rants about trucking and his visceral hatred for the Americans. I hadn't heard one of these in awhile. Nothing was ripe in the garden, but at least I had time to pillage the freezer and to get 2 jars of Grand-Maman’s jam for breakfast. I said bye to my parents. Again. I feel like I spend more time saying goodbye than actually being with them since January. We crossed Québec City and drove under the painted pillars of Dufferin Highway. Marcus remarked on an abandoned building covered in graffiti that Nathan Whitney would love. I wonder if he saw it when he came last year with Joleen.

Charlevoix unfolded before our eyes as bits of hills and craters jumped out of the mist and drizzle. When we got to Saguenay, I really felt like I wasn’t home anymore. We caught a glimpse of the Hauts-Fonds lighthouse, sitting at the mouth of the Fjord, recognizing it from our Google Earth scan of the area a few days before. Despite the unmistakable blue ferry boat that reminded us that we were in Québec, the foggy depths of the Saguenay Fjord had a touch of Scotland in them. Once on the other side of the Saguenay River, we passed a bunch of cities whose name rang a bell but whose geographic situation was very vague in my mind: Les Escoumins, Les Bergeronnes, Tadoussac, Forestville… 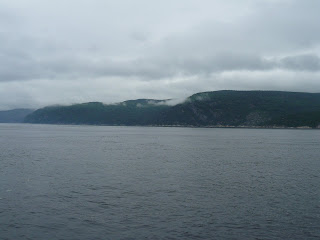 Our arrival in Baie-Comeau was a mix of happiness to be getting closer and of apprehension, since it is the last (relatively) big city we’ll see in a month. Again, we couldn’t find a guitar at Wal-Mart, but the tall, asparagus-looking clerk told us in his weird Côte-Nord accent that there was a pawn shop nearby that might have what we’re looking for. 20 minutes later, we pay 200$ for a very (maybe too) decent guitar and some replacement strings. 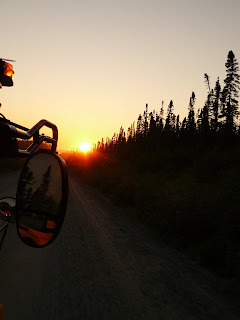 I thought that crossing the gate to the “great north road” was going to be epic and majestic… but really the sign was so small we missed it the first time. When we finally got the right turn, though, we couldn’t help but stare at the hypnotic ribbon of highway stretching for 600 km across a dense, impenetrable wall of black spruce. As we passed Manic II, I had the epiphany that I had never ventured this far north before. The partially paved road got weirder and weirder as we moved up north (see diagram). 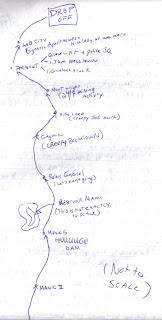 We ended up arriving in Fermont and circle the only mega-building in town for awhile until the local SQ officers pull us over, wondering what the hell we’re up to driving around with a school bus and a canoe trailer at 1:00AM. After a few explanations, they show us a gravel pit next to a small park with a gigantic truck dedicated to miners and their contribution to the city. We set up our tent among broken beer bottles and giggle at this whole f***ing ridiculous situation while kids beatbox in the pitch black night.