As I am writing these lines, I am zipping across the gloomy silhouettes of the Charlevoix Hills in a good old cheese wagon (wherever this expression came from). We are on our way to Labrador, a terra incognita farther away from home than Europe, at least metaphorically. It’s been barely 24 hours since this trip officially started and yet a whole lot of stuff has happened already. Sorry about the shitty writing, the road is a little shaky.

So the story begins at the Museum, where I meet our explorers a little after sunrise, all awake and ready to go. We all hang out until the time of the day is decent enough for us to start piling up gear at the old basketball court. Marcus wakes up, fresh like a rose (somewhat), and we have our first real meal together as the common masses of campers pile up against the doors of the dining hall, attracted by the smell of pancakes like zombies to fresh brains. A few technicalities and a few hugs later, we are on our way to what will for sure be an epic journey. 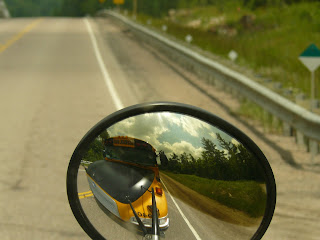 Our driver is a friendly, plad-shirted, mustached man named Stan. The first few kilometres are spent trying to figure out all our new gadgets and toys, namingly the Spot, the GPS and Bubba’s Cobra walkie-talkies. I feel like James Bond in Q’s laboratory. The first official stop is made in Haliburton, where Marcus unsuccessfully attempts to get a pig rig at Boatwerks an where I buy a few of the things we still needed, recruiting Nick as a helper since he happened to be the first one sitting in the front and looked somewhat more awake than everyone else. We stop again at a rest area near Renfrew for a short pee break. A small child and a beautiful golden retriever with a cut tail entertain us as we wait for the washrooms. We take Jacqui with us at the Renfrew Wal-Mart for her to find a cheap guitar we could take with us on the river. The mission is left unaccomplished and we end up with only a bottle of Purell. I have a feeling that we’ll carry an empty waterproof guitar case all trip. We keep rolling along the north shore of Québec, where the cottage traffic paralyses the Montreal-Laurentides axis. Luxury SUVs loaded with expensive boats and fancy barbecue groceries line up as far as the eye can see. Long live the wilderness. I bet they wonder where the hell we are going, rolling towards Montréal with 5 prospectors and a school bus.

We stop in Repentigny for gas. Contrarily to the Cowboys Fringants’ song, Repentigny is anything but “by the sea”.

[Ostia, I just dropped my pen somewhere in the bus and I can’t find it…]

We had no music but somehow it didn’t really matter. I read a bit of my Eric-Emmanuel Schmitt book, but after a few minutes of shaky Québec highway, I realised that chatting with Marcus and sleeping would be much less nausea-prone options to pass time. Among other topics of conversation, we had an ongoing rant about how the Ministry of Transportations of Québec has an incredible talent for ridiculous road safety slogans.

The shore of Lac St-Pierre and the St-Lawrence seemed different than usual for some reason. We arrived in Lévis a little before 20h00. Setting up a campsite in my backyard was quite possibly the weirdest thing I’ve ever experienced on trip. It was both disturbingly familiar and a completely foreign mixture of events. Papa and Maman were babysitting Ginger, my uncle’s chocolate Labrador. She had a running rampage as the kids were setting up their tents. It's funny how it took her a while to figure out that “Gingeur (with a French accent)” and “Ginger (with the proper English pronunciation)” were both her name…

The girls thought for a few minutes that they had lost their tent poles (potentially catastrophic situation now that I think of it), but the guys ended up finding them in their own tent bag. As the girls were setting up a makeshift place to sleep in my old tree house, the boys set up their tent for them, probably half by gallantry and half to rub it in their faces that they were better.
Time came to seek dinner. By some peculiar alignment of the planets, at the sight of Marcus, my dad came to him and happily offered him the keys to his beloved and “not to be touched by anyone but himself and maybe baby Jesus on Christmas day” pick-up truck. I doubt he ever had such spontaneous trust for any stranger. Ever. So we hopped in the truck and drove into town to get the groceries we were missing. If driving in the school bus through Kennedy Highway was weird, parking my dad's truck in Galeries Chagnon and shopping for Marcus’ new pig rig at Atmosphère seemed even more out of place. Chris doesn’t work there anymore, by the way.

We "coyote passed" our way to the IGA, made fun of a girl (who I am quite sure was one of my students at the Juvénat) for having "whore pants" and bougth plantain, breakfast stuff and a ridiculous amount of poutine sauce. The clerk was quite impressed by our 12 packs of powdered sauce, but it definitely was nothing compared to the reaction of the Asthon staff when we ordered 10 regular poutines to go… Biggest order in the history of that restaurant, apparently…

Hearing Marcus mumble “au revoir!” when we left the restaurant instead of the classic “Merci, salut, là!” made me realise how inappropriate that utterance actually is in Québec. Gotta remember that for eventual FSL classes…

We came back and devoured our poutines. It’s funny how hot aluminum plate-induced burns make me happy to be home… somewhat. After trying to get the sports results (it’s gonna be a long month away from TSN for Nick and Nat I think…), we speedwalked to the Chocolats Favoris for a “molle dans le brun”. I met Dr Marcoux’s daughter, Rosalie, at the Choco Favs. She would have done an explorer, quite possibly this one, had she decided to go back to camp this summer instead of working. Dialogue:

As I moved sideways and pointed to the explorers and Marcus sitting in the entrance, she realized what was going on. It’s a small, funny world we live in.

I brought everyone to the terrace. We hung out there and enjoyed the view for awhile, missing Robert Lepage’s “Moulin à images” by about 15 minutes. Too bad. Emily asked “Is this Montreal?”, pointing at Frontenac Castle. Some geography teacher somewhere at Havergal obviously didn’t do his or her job properly at some point. 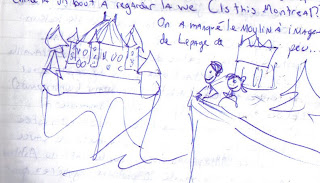 It’s weird not being in Québec for the 400th. At least I still could re-tell the Plaines d’Abraham battle, pointing at the actual places where the events occurred. It was the first time that I had this kind of conversation with English Canadians, I believe. Somehow the use of “you” and “we” came naturally in the tale, even if in fact our respective belonging to the English or French troops of the time is very, very theoretical. I need to think more about that. Good thing that I got 22 days ahead of me.

Going back home and lying down in my Tarn III set up under the apple tree in my backyard was a situation that flirted with absurdity but had a strange, satisfying side to it.