WE ARE (more or less) BACK ON TRACK

After a cumulative of about 3 km of portage, a bunch of sets and the first sunny day without significant rain (yaaaay!), we finally made it to Pékans Falls, at a campsite that has a little something tropical about it (beach, gigantic trees, mosquitoes…) and we caught up with our attempt schedule that kept on being pushed back due to several events such as:
- Fucking Opocopa headwinds
- The kids’ chronic incapacity to hurry up in the morning
- The whole lifejacket episode

So right now we’re not ahead of time, but we’re not late anymore. Wonder-awesome. 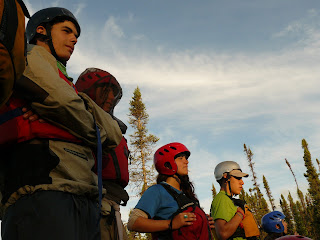 Today’s 3 portages and carryover were particularly efficient. It’s both cool and frustrating to see how our kids can be machines when they want to but sometimes just won’t do anything… but in any case, they were awesome today.

There was a dead mouse on a rock during the carryover. I wondered if, with our usual luck, anyone would freak out at the sight of it during a particularly critical moment. It didn’t happen, though. Good. We also saw an otter jump in the rapids and a few eagles. None of them reclaimed the feather we found the other day.

Nat’s funny. He’s a good paddler but he’s a little zealous in the rapids about spotting rocks. At the sight of the smallest pillow rock he’ll scream “ROOOOOCK” at the top of his voice… considering most of the sets we’re running these days are bump-and-grind style, he screams a lot…

Pékans was pretty impressive. Now that this raging waterfall is pumping loads of water into the Moisie, the river will become major league I'm pretty sure. 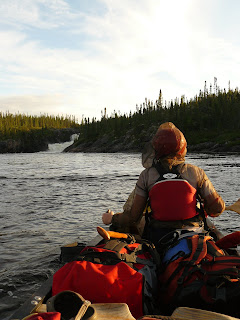 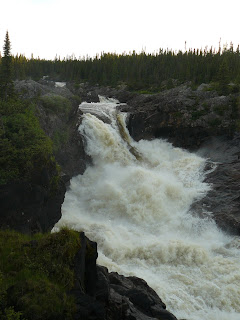 First roasted marshmallows of the summer.

The cabbage smells like mould already and the carrots are progressively melting into a smelly goo. Good thing we have lots of curry. 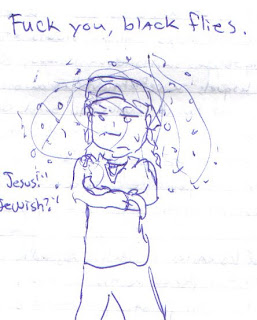 The kids also seem to have a hard time with portaging and the environment... it doesn't impair their habitual cynsim, though: