Another slow but swell start with a good ol’poutine containing more cheese and gravey than potatoes (see comment yesterday on supplies we’re low on).
The view was gorgeous this morning. Cliffs are getting even bigger, just like the waterfalls flowing from them. There are rockslides everywhere. 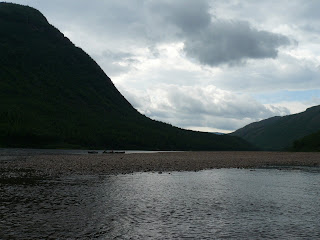 We spent a good chunk of the day on relatively calm water with lots of current, spiced up with a few episodes of headwinds. Around a bend that I wouldn’t remember otherwise, Marcus spotted a porcupine chilling on a gravel bank. 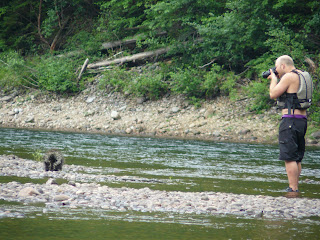 Kids aren’t particularly energetic this morning. Everyone was napping during lunch. I got the UTM wrong for the map and we ended up being farther from the portage than I thought. Damn. 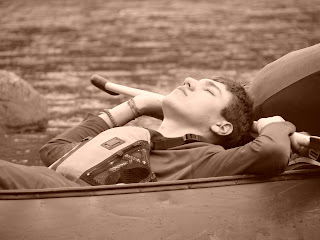 Today’s most important milestone definitely was

Yes, the goddamned Salmon Ladder, legendary portage for its cool and out of the ordinary aspect, but also for its brutality. In fact, to be honest, I was expecting apocalypse so I guess it wasn’t as bad as I thought, but it still was pretty fucking hard. 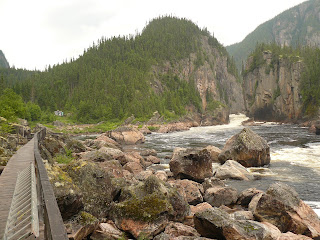 It was pretty much an all-inclusive package for hell.

A helicopter landed just like I was getting to the salmon counters’ cabin and forced me to drop the canoe that had started to vibrate heavily and was menacing to be blown away. It was doing a food drop for the two counters. All the boys came in running when they heard the helicopter because they thought Marcus was in some kind of death trap and had pressed the “911” button on the Spot. We made fun of them for thinking that:
a) Helicopters appear within 3 minutes when you call for help
b) Marcus had time to press the Spot as he was dying in a crevasse
c) Marcus was carrying the Spot on him while portaging a canoe

As the boys vanished back in the woods to get the stuff they had left back there in their panic, Marcus and I sat in the bushes and watched the helicopter take off. Pretty bad ass. 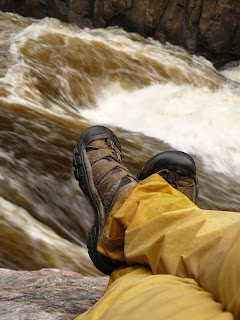 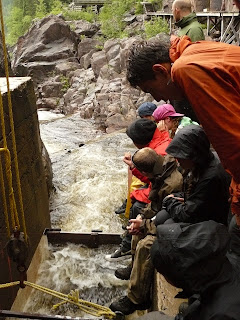 The portage went fairly well considering how hard it was. Bugs and batrachians of all kinds, shapes and colours abounded on the path. When I came back from sweeping the take-out, carrying the bucket, I knocked at the salmon counters’ door and asked them for a little info about the ladder and for the permission to go check it out. Richard and Denis, the two counters (by "counters" I mean that all they do, all day, is count how many salmons go up the ladder), were very generous with their knowledge and told me all kinds of cool facts about salmons. They were scandalized by the fact that we had not brought any fishing gear with us and insisted on giving us some wire and lures. As we went back on the boardwalk to go check out the ladder, Richard showed me how to tie a fishing knot and mentioned a couple of fishing tips and hotspots along the rest of the Moisie. When we came back from the ladder, they handed us a couple of freshly fished trout on a stick that we had for dinner with the pesto. They were delicious. This first encounter with human beings since Labrador City left me full of faith in man’s capacity to be kind and generous with strangers. 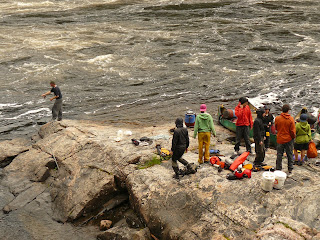 We are sleeping in a deserted fishing lodge tonight. Had there been the owners (Fred and Liette) around, we probably would have turned this in another pit day. They are well known for their kindness and have the reputation of offering food and hospitality to all paddlers that stop by. Despite their absence, they kept up their rep’: they had left a cabin unlocked for us on the otherwise closed down site. Not being particularly warm to the idea of squishing into a small and unnecessarily hot space again, Marcus and I decided to sleep in our tent anyways and to leave the cabin to the kids. Good call. It's like Shanghai at rush hour in there.

It took forever to set up the fucking tarp and to chop wood with a very unsatisfyingly sharpened axe.
The bannock will most likely taste like shit tomorrow. On the brighter side, dinner was delicious. Speaking of which; Luke and Nick nearly slept through dinner. They finally showed up after being yelled at several times. Close call, after such a long, demanding day, no dinner wouldn't have been a good thing.