Here are the hectic harvest hurricanes (and other miscellaneous words starting with an H)...

Here I am, back in the "here-and-now-zone" after a whole bunch of entries about what happened back this summer. After 8 months and a bit on the run, I am finally back in Québec, to my great simultaneous pleasure and disenchantement. I have a relationship I struggle to describe with this province, really. The Stéphane Dion syndrome, maybe. In any case, as you may have noticed, I am still writing in English. I picked that up for awhile, we'll see how it goes. I gave up making promises and committing about writing in one specific language or another, as my past experience in trip logging and other blog-like entries proved that I can't freewrite in one language... I guess it's the downside of being trilingual... 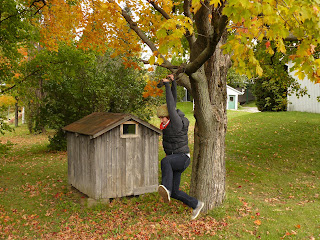 So what have I done since I came back to good ol' "Je me souviens"? Enjoying the fall colours, smells and sights would naturally come first on my list since it is by far the most pleasant thing I've done, even if attending class and trying to figure out my M.A. was unfortunately the things I've actually spent the most time doing. This semester might be the apotheosis of the irrelevance of my teaching degree. There is something very frustrating about being an aspiring teacher and spending a good chunk of my studies engaging in long ethical reflexions on the moral component of teaching cross-curricular competencies or quoting texts about ultra-specific teaching methods rather than trying to become better at what I'll do. A lady from the bureau des stages took the time to wake me up early on my sleep-in day last week to let me know that my practicum project in a native community in La Romaine was unilaterally rejected for a stupid bureaucratic technicality. Way to suck the life out of my motivation to remain in my bacc. No worries, though, as I mourn my practicum project I'm already cogitating about what my next odyssey might be... for now I'll just keep going on short journeys and ridiculous adventures until I find something I really want to do...stay tuned.
My 22nd birthday was ok. Being 22 is far from being exciting, as no particular privilege comes with that specific age except getting dangerously close to paying full prize for my bus pass. Since everyone was busy 22-ing around, the birthday festivities weren't as wild as they used to be. I must be getting old. My birthday week nevertheless included a cool dinner with buddies I did my trip to Spain with and a good night out at the Laval University Pub's patio, both of which were awesome and included some good old fashioned intoxication. Thanks guys. 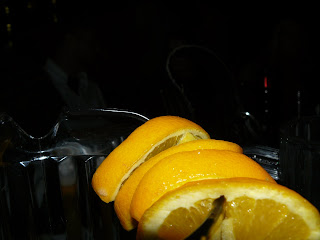 My enjoyment of the fall colours reached its climax this past Sunday, as Lindsay, Hélène, Merhdad and I went on a classic journey to Orléans Island for some pic-nicking and apple-picking. When Champlain first saw Orléans Island, he named it Bacchus Island since it was benefiting from an incredible micro-climate that made wild vines, fruits and vegetables grow in abundance all over it. That micro-Eden must have been pretty cool to see in the early 1600's, especially after the massive disappointment of figuring out he was nowhere near India, or Europe for that matter. "At least SOME things grow here", he probably thought. Orléans Island still is nowadays Québec City's backyard garden. Apples, berries, potatoes, and all kinds of other produce have been the economic motor of the island for ever, and most of the villages established along the shore of the island kept their original settlement buildings, which gives the wandering outsider a little feeling of going back in the first times of the colony just by crossing a sketchy bridge across half the St-Lawrence river. We stopped at the chocolate factory to pick up some truffles and then stuffed our faces with bread and cheese and paté on the riverside in St-François (because of course, 100% of the villages on the island are called "St-Something"). What else would you expect? The afternoon was highlighted by a visit to an apple cider shop and by making fun of all the people standing by the road dressed up as giant apples or other ridiculous stuff to get us to go into their orchard. No, thanks, giant McIntosh teenager, I am going to Roger and Margot's orchard. Margot's smile as she hands me that white plastic bucket to put my apples in has been highlighting my Indian Summers since I've been in high school. Next year, maybe, big apple. Roger and Margot's apple orchard is full of Orléans' island own McIntosh variety apple, and has a breathtaking view on the Laurentians and Mt.Sainte-Anne. As we admired the firework of autumn colours around us, a faint smell of boiled corn cobs and of fresh bread emerged from Margot's shack. God, I love Orléans Island. Here are a few pictures. 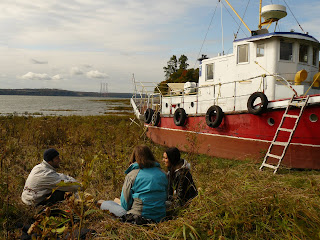 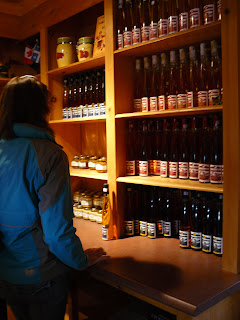 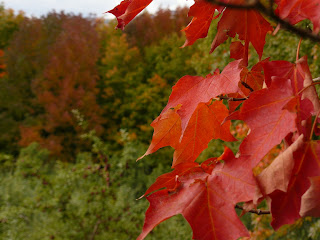 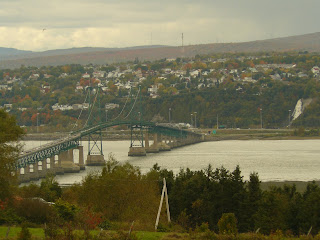 Yep, so that's about it for now. This week my mission is to contain hurricane Thomas, a 3 year-old cousin of mine that we volunteered to babysit for a few days, as well as Ginger, Thomas' 70-ish lbs. chocolate labrador. Fun times ahead... then Friday will be our departure for Belgium and Amsterdam for my dad's business trip. I love how we have family business trips, now. Hopefully it will be just as great as it sounds. 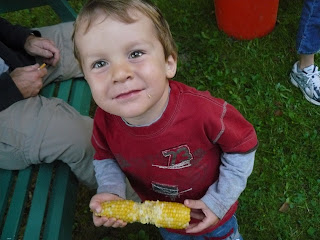