Sick day today. We faced a section of the river that I fondly renamed

As always, the perpetual and impossible objective to be on the water before 11h00 is a complete failure. The reasons why everyone dicks around in all kinds of irrelevant and time-consuming crap are still unknown to science.

The scenery is ridiculous today. Gigantic steep cliffs surround us and waterfall appear before our eyes as we go around each new bend of the river. I’d describe it in a much more detailed and lyrical way if I had time, talent and energy. The whole area is covered in moose tracks. I can’t help but think of Kawartha Dairies when I see them. We found a moose carcass in an eddy this afternoon. I wonder how the poor thing died.

Emily doesn’t listen when I ask her to do something in sets and it drives me insane. The most frustrating thing is that she could if she wanted to. That being said, the kids are pretty impressive paddlers as a whole.

The “Madness” consisted of a series of CIII-CIV-CV all lined up, followed by 13 km of heavy current, shallow river until an opening. Portage after portage after lining after carryover, our physical and mental health quickly eroded as dehydration, pain, uncertain weather and misplaced portages on the map made the day seem endless.

This place is just too cool. As we entered in this brand new wooden cabin, we were greeted by a stuffed moosehead beaming blankly at us. Marcus and I “shottied” the upper loft and spent a great deal of time trying to figure out the electrical system and the gas valves. We couldn’t make anything work besides two lamps that we turned on pretty much by accident after countless trials and errors. As we unpacked and Marcus tried to figure out “Santeria” with our guitar, the kids slowly cooked a gigantic pot of egg foo yong that turned (once again, I guess we’ll never learn) the cabin into a sauna. Bad call, especially since we were occupying the upper part of the building… To avoid low blood sugar-induced freakouts, I whipped out one of the boxes of candy that had been sitting in my barrel since we left and handed some to everyone.

I rummaged around the cabin, partly to try to figure out the power, but also just for the hell of it, coming across several clues of who that Berny guy might be. He seems to be:

a) Big on hunting
b) into helicopter business
c) the owner of a cute golden retriever, whose picture he framed in a somewhat creepy 3D collage

It’s a strange feeling to be exploring someone’s belongings and probably cherished possessions without ever even meeting the guy. I wonder if we’ll ever come across him some day... 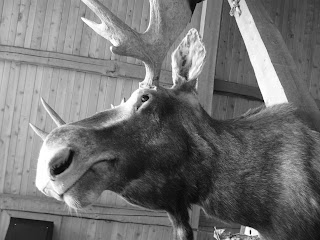 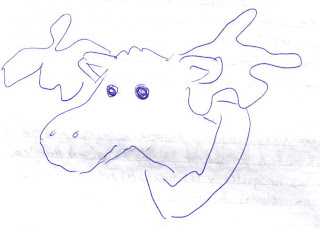