Today was THE most famous, critical and important day of the trip:

The day started with me realizing that my "blister" from yesterday was some kind of foreign body inside my foot that had gone so badly infected through the night that I couldn't stand on it. Perfect. Used to the good old bactine-polysporin-excruciating scrubbing leitmotiv, I somewhat fixed myself for the day within a couple of minutes. If temporarily getting rid of infection was a job, I'd be president of the union. We left our campsite at the same time as usual (our intent to get out early being ruined by a temporary tattoo extravaganza) and embarked on one of the longest, most intense and best known series of rapids I’ve ever had a chance to see in real life. 6km of continuous CIII+ boosted with a water level I’m still not even sure about.

It took us over 9 hours. 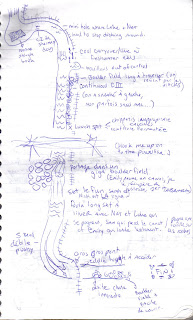 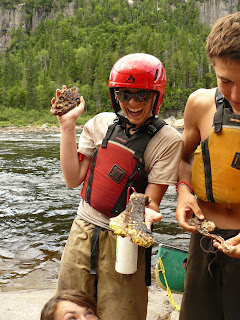 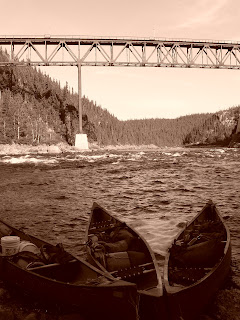 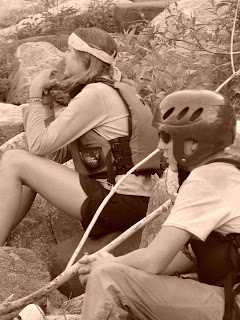 For some reason I thought that our trip would end right after Train Track in a great apotheosis of saltwater and sand dunes. But really, the St-Lawrence river is still some 20km after Train Tracks. Quite anticlimactic, especially after 10 hours of stressful and demanding paddling. It seemed like the river was stretching on purpose before us so we would never actually finish. You big, watery bitch. 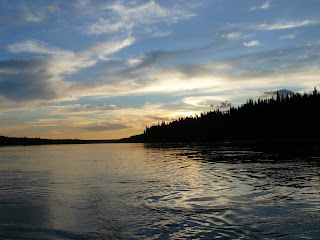 The return to civilisation was sudden and brutal. Our first plan was to camp directly in Moisie, but dusk fell and we had to camp up an absurdly steep sand dune. We set up a brigade and struggled to haul up all our stuff. Once on top, we were interrupted by a fairly intoxicated man in a jeep with his family that asked me in slurry French what the hell we were doing here and where we came from. After a few minutes of monosyllabic answers, he got bored and left. We found a spot that wasn’t too covered with ATV ruts for the canoes and set up our tents against a bunch of small trees, hoping not to get run over at night. As we started cooking dinner, we realised that we were camping a few hundred metres away from a gigantic bonfire that became quickly surrounded by pickup trucks and drunken locals on their ATVs enjoying this nice Saturday night. It was the first time I was aware of the day of the week since we left. Across the river, another bonfire with screaming people was going on. It wasn't exactly the nice, slow-paced, bucolic last evening I had pictured. We cooked gallo pinto (con salsichas) with record-breaking speed (after four times, the kids kind of got the hang of it) and I whipped out my last bag of candy to keep up the morale and the blood sugar at an acceptable level until dinner. 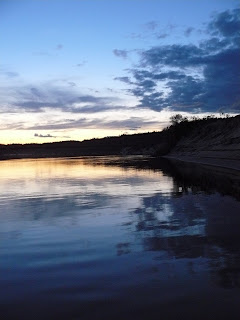 Just before I went to bed, two drunken men drove by on their ATVs and stared at us while uttering universal unintelligible drunken speech. I muttered something back in French and they returned to the bonfire without a word.