In the “Grand n’importe quoi” category, today was a record breaker.

How can two 16-year old boys that did a 12-day Coulonge pin a canoe in a C1 comparable to the sets on the Mattawa?!?!?! I barely believed Nat and Nick when they told me that Luke and Reznick had dumped…It took Marcus and I about 20 minutes and a lot of frustration-induced strength to get the fucking canoe out.

As we reconvened at the end of the set, Nick realised that he had left his Grey Owl paddle on shore at the site of the pin. He was ready to leave it there when read on our faces that he'd better go get it. 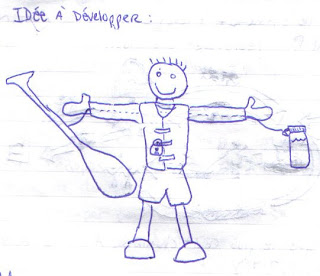 The real adventure of the day, though, was definitely the 1.2km portage we did around waterfalls explorers, prospectors and government officials didn’t even bother naming. Marcus and I, on our first trip, realised that there was a put it (or "putain", as Oli Brière comically renamed it) about 500m after the take out. We scout the portage in its entirety as the kids portage everything to the first put in. The path was ok but was crossing a bunch of boulder fields that Hayley will later describe quite accurately as “ankle breaking territories”. Marcus goes off to scout the rest of the rapids as we munch on wet trail mix. According to him, it’s runnable if we line and carry over parts of it. We decide to take a chance…

Unfortunately, it wasn’t our lucky day. After 200m of sketchy lining and bump-and-grind paddling, Jacqui falling into the water, a broken yoke and a few other échappé-belles, we come to realise that we’ve made a huge mistake, as GOB would say. We definitely can’t keep going, especially since it’s freezing cold, rainy and windy, it’s 16h00 and we got nothing but a handful of soggy peanut-free gorp in our bellies since this morning’s oatmeal and fried fruits. We ain’t got a choice, we have to go back to the put in (sigh).

(Whoever said that the shortest way between A and B was right. Or at least it’s more efficient than what we did this afternoon…)

So after considering several scenarios, we decide to haul the boats back up the rapids in waist-deep water, accumulating bruises, scratches and other miscellaneous small injuries that we can’t feel for the moment because all of our lower body is numb with mild hypothermia. Once everything is taken back to the put in, we start portaging on the path we should have followed in the first place.

On our last trip to get the frou frou that had been left behind, we made quite a strange discovery…

A faint quack-quack attracts Marcus’ attention… as we get closer, we realize that it comes from an abandoned god-knows-what, probably some kind of duckling or gosling, sitting in the bushes, petrified with fear… We joke around about taking it with us and therefore saving it from being eaten by the first predator to come across it, but progressively the joke turns into a real saving intent… as Marcus tries to catch it, the poor thing runs off and falls into a crevasse… Ok so now it’s definitely going to die… 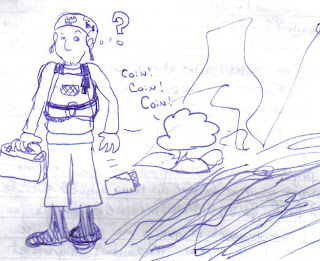 We try to get it out with paddles first, but our attempts remain vain so we change our tactic in sending me face first into the crevasse to get it. It was the first time I ever took a bird in my hands and I was pretty awkward about it since I was a little scared that it might bite me (stupid idea now that I know that some paperclips pinched my fingers harder than that poor thing), but in the end I got it. After debating for a while (Franklin, Lazarus, etc.), we finally decide to call it Moses, since it somewhat sounds like Moisie and we found the poor thing orphan in the river…

At lunchtime (20h30), when we finally had soy nut butter and the rest of grand-maman’s jam on tortillas, the kids get to know Moses. He spent most of his time eating mosquitos (good thing) and shitting all over the place because it was terrified (we need to work on that). Surprisingly, though, it remained very calm as we went down the last sets before our campsite, hiding quietly under my seat, facing the end of the canoe. We had another of those gorgeous rainbows, which helped everyone's morale as we were waiting for Marcus to scout. We set camp at dusk at the middle of a portage. The boys had to go get water and some stuff we left at the beginning of the portage in the dark so Marcus armed them with the GPS set up on "go to" with our campsite coordinates. Losing 3 kids in the woods was the last thing we needed today.

Marcus, in a pyromaniac brainfart, built quite possibly the biggest cooking fire I’ve ever seen and went around shouting utterances such as “Burn, mother’ucker!” in a slightly deviant voice. It’s been a long day for everyone, I guess. As I cooked pizza bannock and refamiliarized with my old friend the outback oven, Moses stopped trying to run away and chilled by my feet. The heat radiating from the bonfire slowly turned it back to its original puffy texture, which made him cuter despite the fact that he still shits all over the place (including my clothes). He slept in our tent in a makeshift nest made out of a plastic bag and moss. 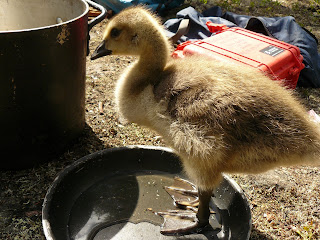 Oh, before I forget: Marcus’ superwatch ran out of batteries today, which leaves us with my 12 year-old Ironman watch with no alarm and two missing buttons as our only provider of time. Great.
Publié par DJ Mums à 18:45