(Height of Land and second Frontenac Castle Pics are courtesy of Marcus)
"Home" is a strange notion that I fail to grasp most of the time.
I guess that travelling around for so long and then exploring Québec afterwards produced a good deal of contradictory feelings about what home with a capital "H" should be. As a human being, are you abilitated to recognize home when it's sitting obviously in front of you? 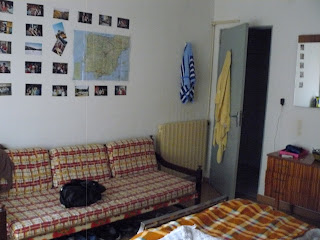 León, Spain, was kind of like home, but not really. I had an apartment of my own, something that I don't dispose of Canada. I had a key set, my own dishware, a chinese paper lamp and some other made in China items to camouflage the rather questionable decoration tastes of my landlord (including, ironically, a frame that said "home sweet home"). Could I call Spain "home", though? I think it would be a little ambitious, given that I wasn't even near being born or raised there and that my grasp on the language is very relative (it took me 3 weeks to figure out that "celeri", even pronounced with a convincing spanish accent, isn't an actual word in Spanish). Nevertheless, there sure was a comfort in having my own things and evolving in an environment that I genuinely felt good in. After the ludicrous journey I made back from Scotland with José (see previous post for more details on that epic adventure), walking back to my flat on Calle San Rafael and knowing that I was about to lie on my bed and be surrounded by my own little familiar universe was a very wholesome, satisfying thought. Yet, I have left almost no trace of my passage in Spain and therefore it's a little depressing to think that it definitely wouldn't be the same if I went back there and looked for my former bearings. If "Home" is a place you can always go back to, I'd rather not think of León as Home, since it would thus make me homeless. 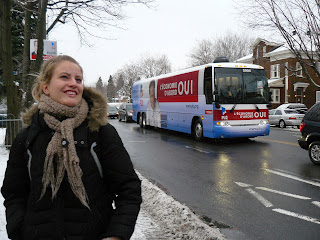 I was born and raised in Québec, and therefore I guess I can be called a Quebecer. Is my Home the province of Québec at large, then? That would be an interesting concept. I was recently informed that I was not allowed to give blood anymore since I've spent too long abroad (a total of over 6 months). If blood is what ties one to land, then I am fucked. If it's the degree of identification to your fellow inhabitants of the socalled land, considering the last provincial election results, I am also rather screwed. Moreover, the very fact that I write this blog in English can be considered as a kind of high treason to the socalled "French Canadian Heritage", which would also bring me even farther away from home, at least according to whoever is leaving graffitis in our student lounge. As if it wasn't enough, I also encoutered a lot of strange episodes of "foreingness" since I got back. 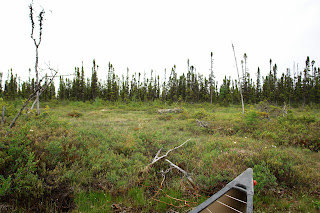 This summer, as we were paddling the headwaters of the Moisie river, we crossed the height of land, which is basically the place where water branches off into two different hydrographic areas. Conveniently enough, the height of land between the Atlantic and the Artic watersheds is also the border of Labrador and Québec. Yes, that same border that premier of Québec Maurice Duplessis gladly peed on some time in the fourties just for the sake of demonstrating how absurd it was to draw a line there in the middle of nowhere and to cut Québec from a huge pool of natural resources. Considering how the province has been treating what it's got resource-wise, it makes one wonder if we actually deserve Labrador at all, but since that's not today's topic, I will spare you a well deserved rant about our environmental policies. Anyways, when crossing this border, especially after being far away after so long, I expected to have some kind of "homey" feeling when I'd reach the border with my own province. But the truth is that Labrador looks just like Québec: lichen, granite, muddy and buggy floating bogs and shitloads of black spruce. As astoundingly wild and beautiful as both sides of the border were, I was disappointed to be unable to tell both apart. 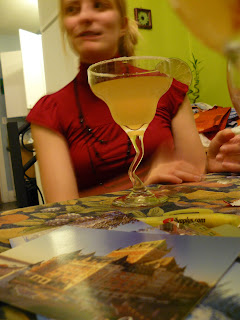 More recently, we were having dinner at Marilyne's for her birthday. After drinking a (few) margarita(s) to try out the new glasses we had given her for the occasion, Marilyne, Geneviève and I started writing some postcards to some mutual friends abroad. It is genuinely difficult to find a postcard in Québec with a truly representative picture on it. Most of them have sweet, friendly summer shots representing the oldest part of town, which may lead people all over the world to the very erroneous thought that Québec has a bearable climate. Of course, it's hard to tell on a picture, even a winter one, that it's about -30 and that it's the 4th time someone faceplants in the stairs that morning because it's icy all over and the city administration just doesn't give a shit. One of the pictures of the postcards struck us all as possibly the weirdest one of all. It was a summer picture of Frontenac Castle taken at a truly odd angle that made it look about 3 times its actual size. It also showed no sign of snow, wind, rain, badly indicated detours, restoration work, or any other treathening elements whatsoever. We all agreed that it was probably the least representative picture ever taken of Québec City. We still sent it, but spent half the space on the postcard exposing all the missing or erroneous details on the picture to our buddy in Munich. 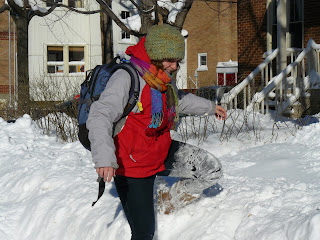 Then, as you may have noticed when I talked about Orléans Island in a previous post (Gee, I'm starting to do self-references... thanks God no one reads this anyways...), some parts of Québec astound me by their beauty and, to a certain extent, exotism. Maybe it's from having been on "trip mode" for so long, but I definitely started looking at things near my home in a very tourist-like manner since I got back. Weird.
So all that to say: where the hell is Home, then? I mean, if I'm not home abroad, if I can't tell my own province apart from the next one, if even the government doesn't trust me as a healthy citizen and if I'm starting to take pictures of Frontenac Castle and Orléans Island because they're exotic, where the hell am I supposed to feel home? WHAT IS Home, anyways? 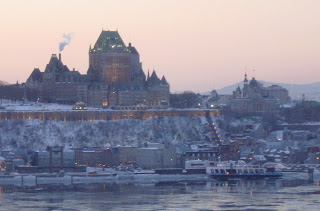 I came up with an attempt answer last weekend. It was the first day of really nice weather since the end of the semester and I was finally able to go air out my brain a little. A splendid feeling, needless to say, after an exhausting end of the semester, punctuated by mind-twisting emotional schemes and long hiatuses away from the out-of-doors. If you know me a little, you probably already know that long walks outside in wild or uncommon weather usually spark a few new ideas within my brain. I guess that my synapses work better below zero or something. It was about -25 that afternoon. I was planning and longing to go outside all day, but cleaning up the basement, filling in internship paperwork and other miscellaneous chores of very little interest kept me inside until almost dusk. When I finally got out, the sun was slowly starting to set, but yet I had time to walk about 10km across town until it got truly beautiful. Lévis, as many of my North Shore buddies like to remind me, is nice almost exclusively because it has the best possible viewpoint on Québec City. From the hills of Pointe Lévy, one can see pretty much all the surroundings: from Orléans Island all the way to the Pierre-Laporte Bridge, from the old town to far beyond the first hills of the Laurentians. That's when it hit me. As far as I could see, I was surrounded by familiarity. I could imagine the exact route to go from any point on this landscape to any other. Everywhere was the house or apartment of friends, family or miscellaneous acquaintances. I had hiked or snowshoed all the way up some of the mountains I could see in the back drop. I had crossed the St-Lawrence in any possible weather (and physical) condition. I had listened to a Paul McCartney concert from across the valley, I had drank wine at the ferry station, I had biked the entire shoreline at more occasions that I could count, and I was leaning against the building where I spent most of my teenage years. I WAS home. No matter if I was not able to recognize Québec when I entered it, or if I was spending all my summers away from it, or if pictures of the Castle seemed awfully off... I was home, and there was absolutely no other place in the world where I would feel like I felt at that exact time. That's when it also occured to me that it was freakin' -25 and that I was standing motionless on the edge of a windy hill, no more than mildly bothered by the "slap in the face" ghusting breeze. I was adapted. I knew how not to trip on icy sidewalks. I knew you were an idiot if you weren't wearing a tuque. I was FROM here. I was more than comfortable, more than surviving. 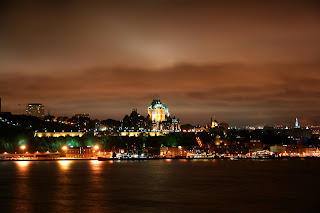 At this amazing epiphany, the Frontenac Castle itself, the real one, not the weird oversized one from the postcard, lit up as if it was approving my thoughts. As in a "damn straight, you're from here, whether you like it or not". The best part I think is that this precise instant can never be put on any postcard. It was the most gigantic wink I have ever been given in my life.
That is it for today I believe. Sorry about this unusually rant-like, philosophic entry. As I am going to Cuba on vacation tomorrow, the next post will probably be about beaches, palm trees, piña coladas and miscellaneous vacation adventures, and therefore quite possibly less deep. Stay tuned.
Publié par DJ Mums à 12:23

I didn't read everything on here, I got lagged in my reading! As of little coffee session already told you.

I did read how ever this last entry. Philosophical? Since when id Dj Mums ever NONE philosophical? You always had the nack to wrap around an idea around the most innocent looking things. So yeah, we don't mind the new point of view on Home and the Castle ;)


I say we, but I don't know how many DO read this. I speak therefor only for myself.

As usual I really like the insight I can find on your blog. Your "sikee" (I have no clue how to write that word, I wanted to say a word representing your way of thinking and your general thoughts.) always was a weeee bit different than most and so reading that insight always was interesting.