"T"
Interestingly enough, this letter seems to have been some kind of a recurrent pattern in my life lately.
T like Travel. 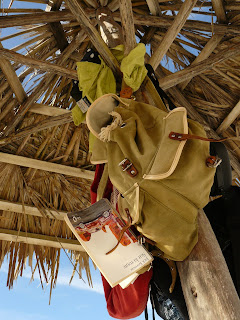 I was in Cuba for Christmas. It was warm, sunny and, more importantly, as far as possible from the school-homework-sleep routine that started to stick to my everyday life like snot on a babysitter. Apart from basking in the sun, snorkelling around in warm, turquoise waters and finally finishing Kerouac's "On the Road", my parents and I also ventured to La Havana for a day. As far as a government-owned monopolistic tour operator can get you to see the "real" Cuba, it was overall a sweet excursion. We walked around the old town, admiring the colonial heritage and the very first important European constructions in America. The guide was awesome, explaining many cool details about some apparently unimportant buildings: "This building here was entirely destroyed by a fire in the mid 1800's because an illegal stock of chemical products was stored there and caught on fire. 18 firemen were killed in the accident and their tomb in the Havana Cemetery is the biggest one ever built in town", said Roberto with his well hidden Spanish accent. 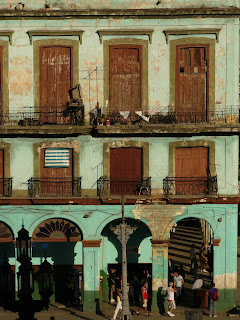 The coolest part of the visit came later on, as we drove around the Miramar. This neighbourhood of La Havana used to be the rich area, where all the casino owners and miscellaneous mobsters got their houses built. When the Cubans rebelled against the Yankees in 1959 and Fidel kicked out all the ones that hadn't already flied out, these residences were redistributed to working class families as a symbol of the Cuban re-appropriation of the Island. Still nowadays, ordinary people live in these mansions. Unfortunately, as it is the case in many other places in Cuba, the lack of money and supplies and frequent hurricanes caused the neigbourhood to look very neglected. A layer of mud and dirt covers the pastel stucco walls of the luxury houses. Window panes are missing. Plants grow out of the cracks. Chickens are running free on front lawns... it's basically as if some incredibly powerful outburst had occurred there and left the whole place to abandonment. And yet you definitely can find tons of people around Miramar. Not only can you find them, but the residents 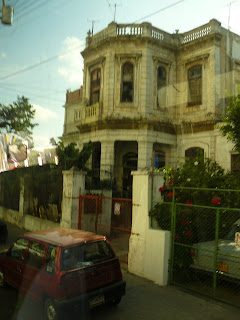 are good humoured and smile at each other. It's a little as if the Hurricane Katrina survivors were singing and dancing among their destroyed belongings. A few days before the 50th anniversary of the Cuban revolution, this post-apocalyptic looking neighbourhood really got me thinking. In a way, you can't help imagining how this place looked like in 1956, with all the freshly painted pastel colours, the art deco columns and the neatly maintained gardens. Yet, as beautiful as Miramar must have been back in the days, you also can't avoid thinking of the injustice and rebellion it provoked. It was by far the most complex thing I've ever felt by staring at plaster walls.
T like Teaching.
I am doing my practicum III in an elementary school, no big deal. Actually, I finished friday night, after five weeks of running around, story telling, singing along, charades, gestures, laughs, cries, crisis management, forgotten lunches, allergy warnings, crayons, markers, lost scissors, photocopy machines, school buses, ranting at kids for throwing snowballs, exams, memos to parents, union assemblies, zootherapy, surveys, agendas, activity books, complaints about the school reform, meetings with the principal(s), figuring out who walks home and who takes the bus, etc.
I was tired. I wonder why.
Jokes apart, the practicum was neat. I got to teach to lots of different groups, all with their strenghts and weaknesses, to take the kids through a whole unit and to goof around with my crazy backpocket activities. Flashcards were also a big part of my 5 weeks. I am now officially a black belt thrid dan in flashcard lessons. Even if I came back home about half the time wondering how the hell I was going to make it through my entire carreer, the feeling you get from teaching kids such a basic skill as reading, writing and speaking English is incredibly rewarding.
T like Tea
I must be getting old, since every now and then I have tea with buddies on Friday nights. Maybe it means that I'll be bungee jumping when I'm 90, who knows?
T like train. 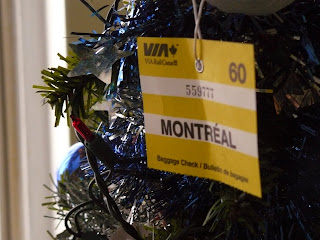 I am not quite to the point where I am a railfan, but I really enjoy taking the train. I love just gliding around in the Québec countryside. It must be that "old people" thing again. Anyways, I particularly love the train when it takes me to Montréal to hang out with Catherine. After a late arrival due to mysterious occurrences upon the rail schedule, I finally made it to Cath's flat near Joliette station. She was starting to wonder where the hell I had been and greeted me with a sigh of relief, as her neighbourhood is rather sketchy, especially for someone from a village as tiny as Berthier. The whole point of my expedition to Montréal was to go check out a neat Andy Warhol exhibition at the Musée des Beaux Arts, but this adventure was only planned for the next morning so we decided to drink orange juice and watch girly movies all night. Ahhhh.
Thanks to our great sense of organisation and to Catherine's room mate's spotless knowledge of downtown Montréal, we ended up at the wrong museum and had to walk 40 minutes in order to get to the Beaux Arts. Fortunately, though, we were still early enough to enjoy Warhol without having to wait in a line that extended all the way to the street when we got out. Madness. Warhol reached all my expectations. I love the dude's perception of art and I found his work very inspiring. Needless to say he was a nutcase, though. 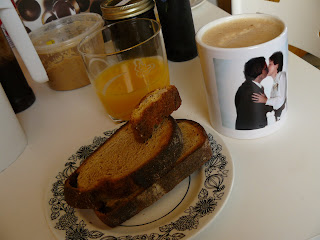 We spent the rest of the afternoon hanging out with Marie-Andrée around the Plateau Mont-Royal, a relatively fancy neighbourhood of Montréal and had delicious Korean food at a restaurant we ended up in by pure chance. Before heading home, we visited Alpaqa, a store specialised in Alpaga wool products, where the space cadet who sold Marie-Andrée a new pair of gloves seemed to come directly from 1967. After a few attempts to meet with Iain, a buddy of mine from camp, we failed (again) at seeing each other. Next time, maybe. The night went smoothly as we watched a wicked documentary about the Algonquin nation while drinking micro-brewery beer and possibly one of the worst poutines I've ever had in my whole existence. We should have gone to the Banquise.
The finale of the weekend consisted of a scrumptious breakfast with Catherine with lots of fancy bread, fancy coffee, homemade peanut butter and topped with turtles and ti-coq cookies. Auguries of a burn-out for my nutritionnist.
T like training
Because yes, I have a nutritionist. Fancy, eh? After we came back from Amsterdam, my mom decided that she was tired of the entire family being overweight so in a fit of rage she signed us up both for the gym and peer pressured my dad to start swimming laps. Weirdest thing of all, it worked wonderfully. We all lost like 15lbs and are in our greatest shape ever. Neat. The nutritionist wasn't quite as effective, though. I think that our relationship with food was captured in that dialogue between my mom and her sister the other day.
[Mom]: So we decided to see a nutritionist and to put the family on a diet...
[Auntie]: Great. It's courageous of you to decide to never like eating again.
T like Terrifying obstacle course 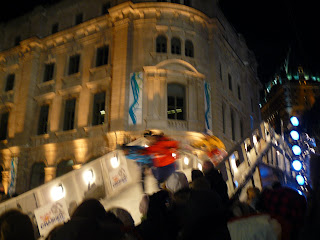 I watched the Red Bull Crashed Ice with Marilyne and an acquaintance of hers who studied Semantics with her when we were in León. Besides the fact that it was -25°C (without the shadow of an exaggeration here, I swear), we had a great time. There is nothing like watching 4 dudes racing down an absurd downhill ramp full of obstacles and smoking their faces against hockey bands for the enjoyment of 200 000 people. Whoever invented this sport should get the Nobel Prize. We watched the final race in a pub near the Ilôt fleuri, and as the night advanced, more and more people joined in, all dressed in their ski suits. Great night.
T like Things in a museum.
Ok, this "T" is a little far fetched, but anyways, I really wanted to mention my latest Wednesday night adventure. So there is this exhibition at the Musée National des Beaux Arts du Québec about modern and conceptual artists who have something to do with Québec City (another sequel event to the 400th anniversairy...). Eager to check it out, I called my friend Sandra and offered her to go. She accepted, and Andréanne and Chrystel also wanted to come. Soon after, Andréannne informed me that her boyfriend Alex, a notorious heavy metal fan and probably the last person you'd ever expect to meet in a museum, also wanted to come. So here we were on a wednesday night, driving in Andréanne's boat-sized car towards the museum. Chrystel was supposed to meet with us there, and since we were a little late and struggled to find a parking spot, Andréanne dropped me in front of the museum so I could find Chrystel and tell her the others were coming. So I enter the museum alone, expecting to find a frustrated Chrystel, and end up face to face with about 300 fancy people listening to an opening speech. Astounded, I look around and try unsuccessfully to find Chrystel. By the time the others joined me, I was just informed that it was the grand opening of a d'Ingres exhibition and I was holding a glass of complimentary wine. The four of us stood awkwardly among the jet setters for awhile, hoping to see Chrystel somewhere, but she never came. The next day, I found out that she had gotten to the wrong museum and had waited for us in the lobby of the musée de la civilisation for half an hour before realising her mistake and heading home. The best part of the story is that because of the opening, the access to the museum was free of charge, so we saved 7 bucks each and had the modern art exhibition almost to ourselves, since everyone else just wanted to check out the new d'Ingres exhibition. We ended the night in a Tim Hortons, eating sandwiches and discussing contemporary art.
T like The End.
Publié par DJ Mums à 09:47

This will be heart breakingly short, for I am REALLY LATE FOR WORK!!!!


Not as exhotic as other blog entries I've read from you, but still Oh so deliciously packed with none other than Mumsy adventures! You should think about a series or something...


I thought my life had its querky moments. I will say this though : Your writting seems to be getting it own style, I would bet I could recognized your hand writting(not physiquly)...