Sometimes you wish you had your camera, but you don't.
This past Friday, I saw the weirdest fucking thing I've ever witnessed alive. It was about five to seven and I was strolling on the campus on my way from the bus stop to my Literacy and language arts class. 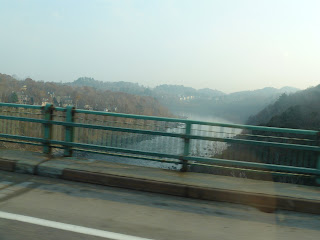 The air was so cold it was hard to breathe and the grass felt like a solid block of ice that emitted just a light cracking sound when I stepped on it. It was one of these morning where you can tell that someone is living their first winter in Québec City from a mile away just by looking at the way they speedwalk from one hall to another with that kind of "holycrapholycrapholycrap" strut.
So I'm walking to the DeSève Hall, and there, right in front of the DeKoninck, I see a huge grey squirrel, all fattened up for a winter of nightmarish weather, nibbling on an unidentified piece of food between its front paws. Around it, there's about half a dozen of fierce looking black crowes. These birds get creepy when the cold days come. They were staring a the poor furball with the firm intention of bullying it until it gave away whatever it was eating. So as I keep walking, I watch the birds getting closer and I slightly slow down to see the big scene coming up... But as the biggest crow is winding up to attack the squirrel, the rodent just snaps and charges the bird full speed, literally tackling it to the ground and scratching the fuck out of it. As I am trying to make sense of what I see, feathers are flying into the air and the other birds just back up and stare at the scene, probably as puzzled as I am. As the squirrel is busy beating the shit out of the crow, another bird makes a break for the piece of food it left behind, but the squirrel is quick enough to take it before and books it up a big tree with its food. The birds fly away, and I just stand there like an idiot, realizing that I am the only person to have noticed this whole episode.
I have always been opposed to cellphone cameras since they take low quality of usually not-so-relevant stuff. But this time, I actually wished I had one. 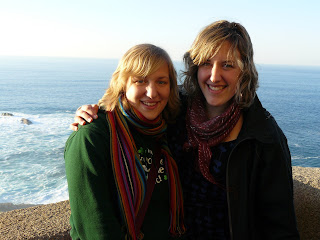 At other times, you do have a camera, you take pictures of weird things and you don't really realize how weird they are until a while after the deed.
When I was studying abroad in Spain, I made friends with Anne, a girl from Germany. We used to live in the same residence before I moved in my flat and the guy at the hotel was the first to actually notice that we kind of looked like each other. In fact, he didn't really notice... he was absolutely convinced that we were the same person, which led to a few interesting misunderstandings and "Why 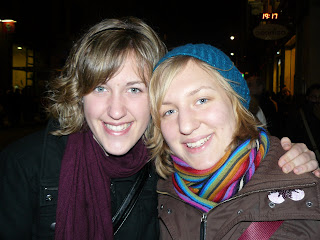 did you do that, I just told you not to like five minutes ago!" mishaps. We eventually moved into our own respective apartments, but we'd still hang out with each other quite a bit since we were in the same faculty at school and had many common friends. All along my stay in Spain, random people would come to me and talk to me in German, thinking I was her, and the other way around. We kind of got to a point where it became an inside joke that we were long lost twins. We even got away several times with introducing ourselves 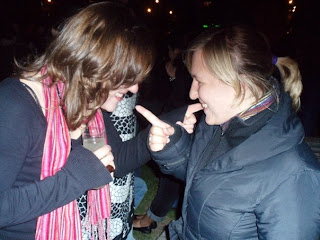 as non-identical twins and got tagged on each other's photos on Facebook all the time. In fact, my own family commented on pictures of her, thinking it was me. I didn't really think about all of this a lot when I came back home, but lately I was skimming through some pictures of Spain during a boring class and it hit me all of a sudden: holy mother of God, do we ever look like each other! Being an only child, I feel like it is even more strange to see someone who looks like you this much. This fall, I also found out that our birthdays were only a few days apart. It's almost like one of those corny Lindsay Lohan movies... I guess you can see for yourselves in these pictures. 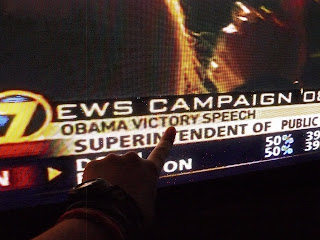 Finally, some other times, you do have your camera, and you realise right away that you captured THE moment. Like at our belated student association Halloween party this year. It was election night in the States, so we convinced the owner of the small bar we were partying into to switch from TSN to a news channel so we could see who had won. We found out, just like the rest of the world, that the USA had just elected their first African-American president. History. I took a few pictures of the TV and of us, to remember every detail of the scene and be able to tell my grandchildren that we were there when it happened. The only thing is that it might be a little complicated to explain to my descendance why exactly granny was dressed like Waldo while living history with a capital H. At least I guess I wasn't the first one to look like an idiot during a great moment... someone, somewhere, must have won a milk chugging contest at the 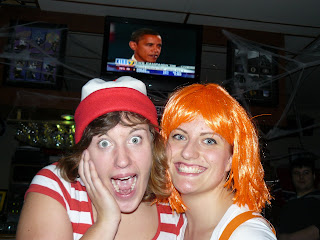 exact moment where Neil Armstrong walked on the moon, or has tried to beat the world record of hula hoop when the Hiroshima bomb hit. In any case, that Halloween party was sick-o. It was great to be able to get away from it all for a night, dress like dumbasses, frolick in toilet paper, eat poutine at 3 in the morning and ask the girl at the counter for a glass of water in an irrealistic attempt to be a little less hungover the next morning. I guess I missed Québec.