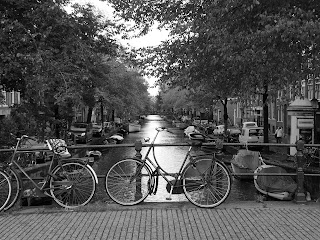 Me again.
So last time I wrote an entry on this blog, I promised that I'd write again asap to tell you all about Amsterdam.
That was a dirty lie.
I kind of wish I had a good excuse for it, but the truth is that I don't even feel sorry about it in the first place. If you had commented and did not let me feel like an idiot writing this blog for no reason at all, none of this would happen. In any case, let's move on to Amsterdam before I am tempted to go back to my pedagogy homework. Ok, that was also a lie, we all know there is no such thing as temptation in the world of pedagogy apart from the temptation to drop the class and never return again, but let's just pretend it could happen. 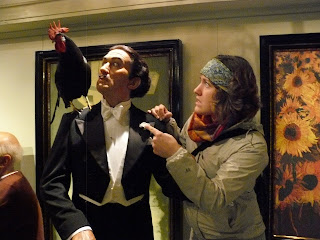 Amsterdam, then. Amsterdam was green, relaxing, peaceful and yet in full cultural ebullition. I wished I lived there several times while strolling along the canals and gazing in amazement at the 18th century houses slowly sinking into the marshy soil the Dutch capital has been erected on. Among the highlights of the trip was our visit to Madame Tussaud's wax museum, in which we could not resist the temptation of taking corny pictures with the wax statues of our favourite celebrities. I guess human nature can be defined by our number of chromosomes, our use of written communication and our tendency to love corny shit. 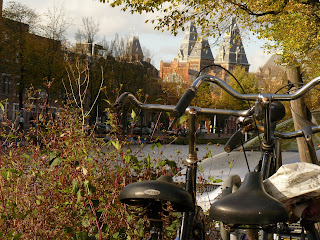 Don't worry, though, I also did other stuff that was a little bit more culturally enhancing, such as visiting Anne Frank's house and the Van Gogh Museum. Anne Frank's house is a disturbing place. Anne's dad, when he turned the small annex where he hid with the entire family during the war into a museum, asked that they'd leave the place just like it was when he came back from the concentration camp, that is, completely empty. So the visit consists basically of walking along the minuscule empty rooms, usually in silence, and every now and then, noticing a trace that shows that a family hid there, like a postcard glued to a wall, or a height mark in the door frame, or a dent in the wooden floor. In addition to the already strange atmosphere, we visited the house during a huge thunderstorm. Every thunder strike seemed like the sound of a bomb exploding in the surroundings. Surreal. The Van Gogh Museum was also very remarkable, but in a completely different way. It was a very cool feeling to beam at the masterpieces so often seen in textbooks from about 4 inches away from the wall. Van Gogh was afflicted with some mental illness that made him epileptic and had serious behaviour issues. Along the chronology of his most famous paintings, you could almost see which brush stroke he did last and imagine him frantically covering the canvas with an obsessive-compulsive care. I don't think that I've ever felt that close to a famous artist before. 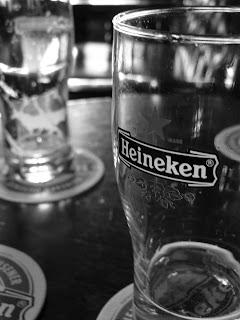 On the morning of the last full day, my parents decided to venture on their own into the Red Light District to cheer my dad up after he found out that the Heineken museum was closed for the season, leaving me alone all day. I told myself that it was now or never that I'd have a chance to go check out the Rijks Museum, the equivalent of the Louvre for the Netherlands. Because most of the building was closed for renovations, the administration had conveniently installed all the masterpieces and all the rest of the stuff I really wanted to see in one small hall, which I visited almost alone with a couple of Japanese tourists and two or three dudes that also didn't want to suffer the endless afternoon lines. I always liked Dutch paintings because of the refinement of details and the subtility of the hidden hints within the seemingly austere portraits, but standing in front of Rembrandt's famous Nightwatch was even more intense than I imagined. I literally got shivers. Jeez, the more I grow old the more I become some kind of geeky art-devouring monster...
So that was about it for Amsterdam. Of course I did a lot more stuff (as this picture of an empty glass of beer may have already suggested), but recently I've been trying to quit systematically writing everything I do during my trips. Needless to say it's been difficult. Before leaving you for another couple of wonderful hours spent filling ridiculous pedagogy exercises, I'll just ask once more: is anyone reading this? Actually?
In any case, I'll stop promising about writing more in this blog because this is actually a little depressing, but hopefully I'll be back for some more adventures some time soon.
Publié par DJ Mums à 18:30

Reading things in the worse chronicle order brings its "querks". I get to know in advance if you WILL or WONT write a new blog entry and why. SO interesting in its self I almost don't want to read the next for fear of knowing too much.

I will probably NOT however write another comment until you write something new. So here goes for this one:

Hmm, What to say? Well first of I guess I should hate you in some way for havong all these intense moments in completly different countries, BUT You manage, as I already read, to have those kinds of experiences here at home, so I can't really hate you in anyway for that.

Then again, the very fact you seem to be less than 6 months in the same city or country for that matter seems to be reasson enough to devellope some kind of Hate system to put a foundation to how I feel when reading your blog.

THEN AGAIN, I really can't start to feel jealous for a valid reason, knowing you did it all yourself like the free person you are. I can already here a little version of you point a finger at me saying something like : "You are the only one to blame for you lack of trips!" all the while making a face not unlike the one on your profil.

I guess what I am saying is a part of me reads this infernal blog as a way to encourage you to write in it again. To continue living your abnormally full life so that someday it will be enough to kick me in the face.

I am such an egocentric bastard.

OR I am really reading this for your sake alone. You pt some amount of time in this and I guess it merits some kind of feed back, I know I would like to have some.